The Human Remnants of Military, Lawless Mercenaries at Your Door

In the movies, when bad ass unattached soldiers get discharged from the armed forces, that bad ass becomes an even more bad assier mercenary. So with that being said it occurred to me that those same unscrupulous soldiers may also decide to band together and become post apocalypse wasteland overlords. Taking some of the worlds best trained killing machines and giving them access to some of the deadliest weapons on earth and unlimited amounts of ammunition and setting them free on the unsuspecting survivors isn't exactly fair to us lesser men. I imagine they'll use that fact that they are military against us, maybe try and convince us that they are the first wave of government sanctioned military convoys returning law and order to the land, and before we figure it out, it's too late. Then I can see, if we were to figure it out before they breached our "walls" , they would over run a lot of us with their superior training and weaponry. Which ever way, it doesn't look good for the most of us that get in their path. So planning for something like this would more than likely be imperative and very difficult. Not going to say I know what to do, because I don't, I'm not a military tactics expert and or civilian savant, I'm just a dude that thinks this is a very likely occurrence and important to be prepared for. This is one thing I thought of and then when I was reading "Lights Out" by HalfFast and they encountered a very motivated heavily armored and armed group, where I realized that lone wolfing the apocalypse was only an option if you didn't want a home or safe haven. If you are the type of person that wants to put down roots and fortify, you can't do it alone, and the notion of super mercs just makes it all the more unlikely that you'll survive the firefight. I don't even want to do the math on how many regular dudes with regular dude guns and tactics it would take to defend a communal compound post SHTF against a large group or even a small group of marines gone rogue. I know they say that the group that is fortified has a four to one chance ratio over the attacking force, but I would imagine that the number changes when the fortified are townspeople and the attacking force is merciless former marines. Other than implementing a lot of the tactical fortifying methods used in such a book like "Lights Out" I have no idea how to defend a compound from anyone let alone blood thirsty psychopaths on a power trip. How do you combat the shear force of gun power they would have, or grenade...GRENADES!...imagine dealing with grenades being flung at you, or long range snipers...how the hell do you protect your self from long range professional snipers, when you're just a dude. I don't know the answers to any of these questions. Holy jebuzz tanks, how do you stop a tank if one day one roles up on you and your encampment? Just a few questions, would love some answers lol, you got any?

If you are reading this, and you have any ideas how to thwart rogue military forces I would really like to hear them, and not to discourage you from commenting, but I would also like you all to comment on others comments so we can all talk out all the ideas posted. Not that there are many of you adding this lol, but the conversations have to start somewhere. So leave a comment, comment on comments, and let me and the rest of us know your great idea to out military the military. Here's hoping we can get this very important post SHTF theory 101 scenario figured out, you know, before the shit hits. 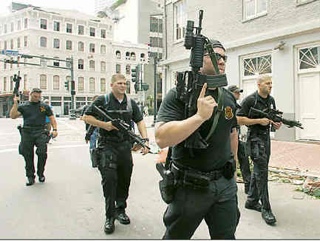