7 Overly Reckless Things to Do Before TEOTWAWKI

We live in a reckless time, and because none of us are asked to be primal or responsible anymore we do insanely messed up dangerous things in order to feel alive. This list is a small list of those things that maybe you want to do before the EOTWAWKI for safeties sake. So in no discernible order here's that list.

1. Skydiving - generally thought of as the grand poobah of reckless endangerment, skydiving is on just about every bucket list out there for one reason...you're jumping out of plain high up in the sky! While we are all told that skydiving isn't as dangerous as we believe, stuff goes wrong. Especially when you factor in surviving the fall lol. We have all heard the stories and watched the video footage of people plummeting to the argh and living to tell the tale. As terrifying as dying during a skydiving accident would be, surviving the perilous fall post-SHTF would be more terrifying, especially for anyone in your party. Where do you take your smashed up friend when there is no hospitals? To the nearest hole in the ground, that's where. Not to mention the most obvious reason this would have to be an addition to your "get it done before the fall" list, the plane, chances are that there isn't going to be a lot of operational planes after TEOTWAWKI.

2. Bungee Jumping - while bungee jumping isn't exactly a new idea, the notion of doing such a thing terrifies most of us and intrigues a small percentage of us. Even though, when asked, people consider bungee jumping a more likely activity they would spontaneously participate in over it's overly excitable plungtastic cousin skydiving, few actually go through with it. The thought of the cord snapping and hurtling us toward the ground with nothing but our faces to break the fall, scares the bejesus out of us. While there haven't been very many fatalities from bungee jumping mishaps, many injuries have occurred even from "successful" jumps. Many of these injuries not exactly bad, but in a post SHTF scenario could prove fatal. So bungee jumping is very much a pre-SHTF bucket list adventure.

3. Mountain Climbing (For Fun)- even though post apocalyptic wastelanders will nodoubtedly be doing some mountain traversing, but for fun? Probably not unless that wastelander actually had a death wish. Why? Mountains are tall, and if you fall off one, you usually die. Weird thing about mountains, not only are they tall, but usually made out of rocks, hard, jagged, skull crushing rock. Slipping and falling pre-SHTF is bad enough, slipping in the post is pretty damn bad if I dont say so myself. Also, pre-SHTF you could have a team of pros guiding you and taking care of you and making sure you don't die. Also, with the pros comes professional equipment. You know as well as I do, that by the time you're needing to climb a mountain post apocalypse you will have long past used all you para cord as shoe lace replacements, and will be using your homemade braided vine rope to climb your post-EOTWAWKI Everest.

4. Running With The Bulls - after the end of the world as we know it, you would probably only find your self running with the bulls in an effort to kill one for food, but before the collapse of society you wanna get it done to fully embrace life. One little known fact about bulls is that they a really huge and very aggressive lol, so armed with that knowledge you can safely bet that the probability of injury when participating in this long running tradition could possibly lead to you being trampled or even gored, injuries one doesn't want after Armageddon.

5.
White Water Rafting - another one of those tasks you may just find yourself doing after the collapse of civilization, but again not for fun. Hard rocks again and raging waters this time, scary stuff when there's no one to fix you. Relying only on your basic understanding of biology and first aid, and using nothing but your basically useless beginners first aid kit, may be a little hard to swallow, but that's life post-SHTF. Nobody likes drowning, but after it all goes sideways, they may not be anyone to mouth to mouth resuscitate you.

6. Rolling Down a Hill in a Tire - a favorite past time of many the children over the years, dying down now that kids don't go outside anymore. Doing it now would be prudent, as it's wildly dangerous. Getting inside a tractor tire and flinging yourself down a hill, may sound easy peasy, but you're spinning at a phenomenal rate and have no real control over yourself or the tire, and that could lead to your demise if you have no one around when you're doing it. Not that I can think of a logical reason for you to be rolling down a hill in a tire post apocalypse haha.

7. Arrow roulette - a favorite event from SNL alumni riddled Adam Sandler joint "Grown Ups" arrow roulette is game where a group of guys (because only guys would be this dumb) get in a group and one of them shoots an arrow straight up in the air, the object is to be the last man to leave the area. I would imagine that stuff like this was being done by tribesmen thousands of years ago to prove their manhood, but with nobody to fix the impending hole in your body, you may wanna get this one out of the way now.

And because as a species we do sooooo many crazy things, while writing this post I came up with too many things for one article, so you can look forward to "7 More Overly Reckless Things to Do Before TEOTWAWKI" later in the week. If you haven't already and like this post, up at the top of the blog (or in the pull down menu if you're on a mobile browser), click on the "7 Things Lists" tab to find more outlandish 7 Post Apocalyptic Things Lists. Thanks for reading this, and don't forget to communicate by leaving a comment in the comment section below. Until next time here's hoping you can get all seven of these overly reckless things done before the shit hits. 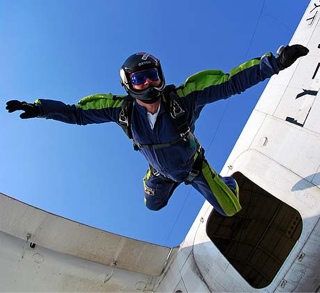