Our apartment I about 1000sq feet, has two bedrooms and five actual closets. Apartment preppers are forever battling with their apartments for space to store preps. Our homestead counterparts could easily have my 1000sq feet as actual spare space to store stuff, whereas I have to store everything I'll need to survive the apocalypse, and still have room to live lol. My wife says she's on board with me and my "hobby" as long as it doesn't make our apartment look like we're hoarders. So I can have and store it as long as it doesn't appear to exist. So finding space where there is no space is going to be a small issue.

A further description of our apartment in more detail so you know exactly what I'm working with. I've enclosed I very rudimentary iPad drawing of our apartment so you can follow along. So when you come into the apartment, directly to your left is a standard 4' hallway closet, followed immediately by a 2' linen closet, and then again immediately followed by a storage room room that's about 4' deep and 10' long. The closet in bedroom #1 is a 6' by 2' deep closet, and the same goes for the closet in bedroom #2. There are three beds in these rooms, a queen in ours and two doubles in the kids room. So that would be repurposed storage zone number one, under the beds. I've read on other blogs that you can store up to three months of food under a twin bed, so I would imagine we could fit somewhere near a years worth under our three beds...theoretically. Obviously the closets could all be used to store preps, but we're looking for repurposed areas.

Because we built the island in our kitchen ourselves when we remodeled the apartment, the countertop on the existing cabinetry is ours, and when I was putting it in I noticed that in the corner, the original cabinet maker decided not to make a corner unit to allow for more storage, but the space is still there. So this 2' x 2' by 32" space under my countertop can be repurposed to store some stuff that we'll not need access frequently and allow us to store it behind the cabinetry. So that's another space repurposed. Also in the kitchen, and again because we made the island, the island itself can be repurposed somewhat. After I finished making the island, the wife said it seems to be about three inches too low, to comfortably use the chairs she had bought for the breakfast bar side of the island, so she has been naggin...errr gently suggesting that I raise it up. Well if I'm raising it up I can build a compartment under the cabinetry to hold some preps. Since she waits about 3" I figure, toilet paper is 4 1/2" I'll raise it up that much and make the equivalent of the entire surface area worth of toilet paper storage room in this repurposing. Also, while thinking of that I thought that our tv is on an 8' x 24" cabinet, and we've often thought that the wall it's on makes the tv seem small, even though at 55" its not small, but if we raised it up say 16" it would fit the wall better, and, make more storage under the existing cabinet.

I've also read on a couple blogs about, storing water in 30 gallon barrels and turning them into decorative tables by adding a top and covering with a nice table clothe, hiding your water in plain sight. This is the kind of thinking that apartment preppers are going to benefit from. We gotta be the out side of the box thinking people if we're going to have decent sized stockpile.

As far as my own situation goes, there is no other storage in the building, you know some apartment buildings will have larger storage rooms in the basement that you can rent to use if you your apartment storage room isnt adequate enough. Our building does not have that. But what I have noticed is that management has opted not to have people occupy the suites on the second floor. The main reason being, that that's where the building stores a lot of it's extra stuff, but there is still a couple suites that are pretty much empty all the time. If I ever got to the point where I needed more space, I could see it being conceivable that I could obtain, maybe the bachelor suite on that floor as my own storage for a reasonable price, if my negotiating and/or bartering skills have improved by then lol. I've also read that other apartment preppers will get off site storage lockers to store excess preps. The only thing I have a problem with there, is in an EOTWAWKI scenario, and the grid goes down, am I going to have reliable access to my materials when I really need them? Seems like to big of a risk to me.plus I could see some scum bag storage facility manager taking advantage of the circumstances and essentially sell us our own stuff back, I mean what are we gonna do call the cops...it's the end of the world...all bets are off.

I know a lot of people are going to say, "well I don't know why you need so much stuff in an apartment anyhow, as an apartment tenant you're going to bug out anyway...buildings won't be safe after TSHTF, they'll be war zones" which in most cases will probably be true, but I live in a tiny town of 3000 people and the HighRise building that I live in is the only structure of its kind in my town, everything else is houses and two story
buildings. So as the only building with a good view of the surrounding are for a long ways, I think of it as a strategically sound stronghold that I should try to maintain for as long as it is safe to do so.

So with all that being said, I hope you can help me think of places to store stuff in my apartment, and the apartments of the many apartment preppers like myself that are looking for a way to have it all, and still be able to move. So if you have any ideas, stick 'em in the comment section below, and we'll start making apartment prepping a better place. 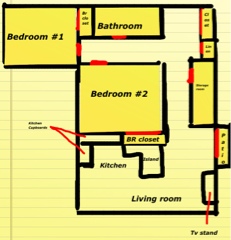