Netflix Trying to Bring Back JERICHO!

Chances are, if you're into TEOTWAWKI you've at least heard of the tv chow Jericho. The show originally ran from 2006-08 on CBS. This was way before I ever even thought of preparing for such an event, but the first time I saw the commercials for Jericho I knew it was going to be a good show, and from the first episode on, it was. I think the downfall to Jericho was that I was too soon after 9/11 for Americans to watch a show based on domestic nuclear attacks, and because of it didn't get the ratings this show should have. The show was cancelled after its first season and after a well executed display of loyalty from the fans of the show CBS decided to bring it back for another season. Season two was short lived and when it was cancelled for good my wife and I were sad lol. All the time I talk about Jericho as an example of when the people and the networks got something wrong. That combination doesn't happen often, both the viewing public and a tv network not seeing a good thing when they see it. Jericho was a breath of fresh air when it came to dramas on tv, it wasn't a cop show and it wasn't a hospital show...holy crap! Let's get rid of it. The show was like nothing on tv at the time and I think the world is ready for it now. That's why when I read an article stating that Netflix was trying to bring the show back and start season three...I damn near shit my pants, pardon my French. I'm so damn excited I sat down and wrote this right after I read the article. Now don't get me wrong, the show isn't back, Netflix is on in very preliminary talks with CBS, but preliminary or not, someone out there recognizes a good thing and is fighting to bring it back, and dammit that means something. 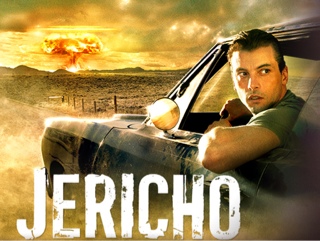