The wife picked up this movie from the new release section of our local movie store because she KNEW I was going to want to see it. I hadn't know much about the movie at all, and besides the notion that it was going to be about an EOTWAWKI scenario I didn't even know what was going to end the world. I gotta start off by saying I love films that just throw you into the movie. What do I mean by that you say, most movies use the first quarter to third of of a movie building characters so you know how to feel when whatever is going to happen to them, around them, above them, under them, so you know how to feel about it for all characters involved. This movie did no such thing, it starts up with a close up of a woman's eyes looking over the city skyline as a nuclear missile is slamming down into and the proceeding fireball, then a tear roll down her cheek and then running. She runs out into the hall way where she finds chaos as everyone is running around the hallways not knowing what do do. They run down the stairways to ground level and when they get there they are met by heat and fire which causes the mob to make its way to the basement, as we're all told in an emergency to do. So as they get to the basement they find a guy (later introduced as Mickey) closing off the basement with something like a hatch door, trying to close them out of the basement. But they reach the door before he can latch it, and a group versus one usually goes to the group and this time is no different. Once inside Mickey locks the door tells everyone to calm down.

This all happens in the first like 30 seconds of the film, I mean it probably took you longer to read it.

So at this point Mickey explains to the people that this is his bunker and that he set it up for an EOTWAWKI scenario and that they would be ok as long as they listened to him, as the only person who was forward thinking enough to prepare for this, he was kinda declaring himself the leader.

I won't delve into more detail about the movie's plot as to not ruin it for the few people that may read this. The people in the fallout shelter deal with a lot of situations that you would think would be issues and a couple that you would hope wouldn't happen, but all the same I think this film tried to keep it as true to form as it could. Now that's not saying that there wasn't any Hollywood type "you gotta just believe that this part is true for the movie to move forward" stuff. But the movie is more about what a group of people would do, when there is seemingly no hope, and how in any situation people can't agree on anything in any situation...hence the title of the film "The Divide".

So the final verdict on this film from me anyway, is good. It was a lowish type movie, who spent their money a things that needed to look as real as could be make, for the film to be more authentic, like the opening missile strike. Probably cost a bit of CGI cash, but was worth it in my eyes. If it had looked hokey I may not have continued watching, but then again everything happens so fast I may have been to far in to care. The plot was decent enough, and all the things that happen with the exception of "the others"(you'll find out) made complete since and are events that I could believe would be fairly probable in this scenario. The acting wasn't academy award calibre but it was decent. The dialogue didn't seem at all cheesy as I didn't notice myself paying attention to it, so it must have been fine. My favorite parts of this movie are this, I love that this movie was made possible by Mickey being a prepper, and although they portrayed him. Slightly off his rocker, they didn't imply that he was crazy for having built this shelter. The second thing I liked about this film was the humanness of it. The writer took a lot of time to think of how people in a group this big living in confined quarters with little or no hope of survival, would think or react to situations they were placed in. Overall I think the movie is good, and worth watching. The biggest thing I took from this from the point of view of a family man trying to prep for similar scenarios was this, I don't know if I can trust anyone outside my immediate family after something like this would happen and I have the shelter prepared to protect us. People will always be people and food and water only go so far right. I feel I would want to help people after TSHTF, but this film really made me question whether or not I would want to house people after. I still think I may show so form of compassion and or charity for wanderers after the fact, but I'm pretty sure at this point that I would want to take the risk of having more people that don't have my family's interests at heart than do in my shelter.

But that's just me. I hope you enjoyed the review, and I hope it makes you want to see the film, as I stated, it is worth watching. Thanks for you time and comments, heres hoping you keep coming back. Until my next post have a great time prepping and I let's hope the shit don't hit. 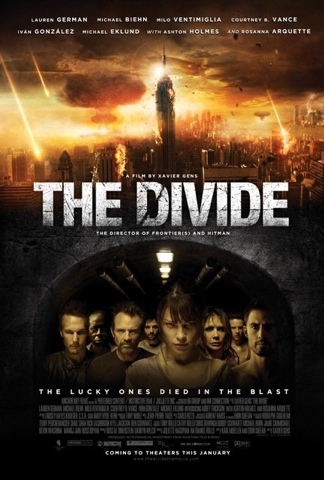