I've read a lot of articles and blogposts about crank radios and some of them being able to charge other devices and thought of how cool that is and how useful that would be in the event of TEOTWAWKI. So earlier this month I ordered an Eton FR160R Microlink Self-Powered Radio to give a try and add to my first BUG OUT BAG. With the exception of and EMP attack over middle America which would more than likely fry all my electrical devices that are plugged into the power outlets in the wall, I have thought that all of my wireless devices would be very useful to me after the shit hits. My iPad has been hyper loaded with books and articles and video and audio information that will help me with certain scenarios in a collapsed society. Right now I am using my iPad and iPod touch to store all information I find online that I don't know, which is a lot, to review and learn from later. So when I found good articles on how to pick a lock, or Hotwire a car, or use a gun or build a bicycle generator, i would save all related material to my notepad or picture files etc etc. I got dozens of books about everything from edible plants to how to rebuild a ford engine (there are mostly fords in the town I live in). Any information that I feel I might ever need after the Internet is gone, I saved now, and will read as I can, or review it after the end of the world. So if you are like me, you can imagine how important i feel my iPad and iPod touch are to me in a societal breakdown. Especially once you a appreciate the notion that as of writing this I have little to no experience in any of this. Now don't get me wrong, I know survival doesn't come from an iPad, but even though I don't have the knowledge base of information on survival imprinted in my brain as of right now, but I am a fairly capable man and when I try to do pretty much anything I have a decent amount of success at it. So I don't doubt that after the shit hits the fan, and I'm in charge of keeping my family alive I believe that I could. But as far as long term survival I do not have the information to recreate society in my home, I don't know how to hunt I don't know how to garden or can or preserve meat... I just don't know this stuff. But if I have books and articles to read, with time I will learn all this stuff...so based on that I believe my iPad will be one of my more important pieces of my post apocalyptic plan. And what will be the most important thing to my iPad after the apocalypse? That's right...power. And if the grid is down and never coming back I'm going to have to make power. Later on I plan on learning how to use a generator and hopefully be able to rewrite where ever I live to use a generator, but for the beginning...this crank radio will have to be source of the power to power my information database. So the purpose of this article for me anyways, was to answer the first question I had about this device which is, "how much cranking will it take me to be able to use my iPod?"

So upon unpackaging the crank radio i know it's going to take a long time to crank charge an iPod considering an iPod takes so much more time to charge in comparison to a regular cell phone. So I read the instructions on how to use it, and follow the instructions on charging a USB device. So upon taking it out, I see that it's a decent size for a bug out bag, which I like, not to big and bulky, but it's also not super tiny that'd be hard to find in the bag. I also like that it is solar capable as well as being a crank charger. However you can only charge other devices via the crank charger. So now onto the question. I hook my dead iPod touch ( dead dead, won't turn on at all) up to the radio via USB cord, start cranking... At first I get a message on the iPod stating that a charge is not supported by this device. So at first, I'm like "F*CK". But I start cranking again, and this time it feels like there is more resistance front he crank and I continue cranking then finally the tell tale sound of the iPod taking the charge. The only real flaw in this at least in my experience with it is this, you can't crank continuously, your arm gets tired, so every time you stop you may or may not be engaged correctly when starting back up again and get that "a charge is not supported by this device" message again and have to fart around with the way the crank is crank before you get the charge again. But, you learn to feel when your good to go again after a while. So with all that aside, and the fact that my freaking arm hurts after a mere fifteen minutes of cranking I decided to stop cranking, as I can not motivate myself to continue any further due to my lack of actual dire need. But this will still do for a test run, so what did I get for my fifteen minutes of cranking you might ask, well I'll tell you. With my brightness level on my iPod at a little over half power, which is dimmer than I normally use it (I'm a power hog for keeping it at full brightness normally) but definitely bright enough to comfortably use, I got a little over an hour of usage. Which I was really surprised, I was pretty certain that I we gonna being getting a 1:1 ratio for crank time to usage time so a 4:1 ratio was significantly better than I anticipated.

So with that being said, I think that my purchase of the Beton micro link FR160 for a meager $38 CAN was a good buy for my first BUG OUT BAG and maybe future B.O.Bs (I need 3 more for the wife and kids). Sure it hurts the f*ck out of my arm, but when TSHTF and TEOTWAWKI is upon this, free electricity is going to be worth the discomfort. Plus if worse comes to worse, the very useful and sometimes sarcastic teenagers can spend all their newfound free time cranking the radio for their good old daddy lol. Kids gotta do something, and being that my two daughters are opposed to work of any kind, this may be a good and simple, if not very painful, job they are both capable of doing to help support their family survive the post apocalyptic wasteland.

Hopefully this was at least a little helpful to my fellow newbie preppers out there who would like to know how certain products work for people that aren't well informed in this field but wanna prepare anyway. Hope you stop by for future posts, don't forget to leave comments, I love hearing from like minded people all over the world. Here's to hearing from you again, and hopefully the shit doesn't hit before it. 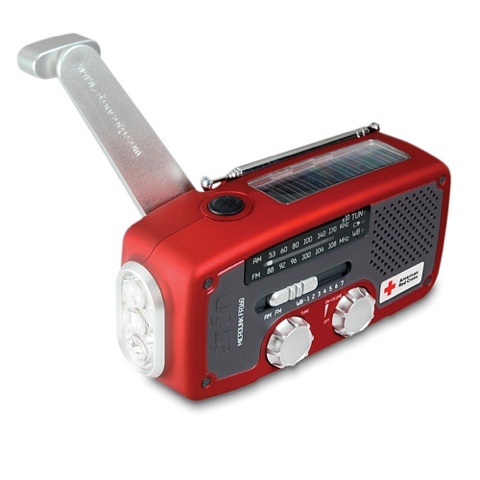