So a few of us EOTWAWKI people out there own iPhones, iPads, or iPod Touches and while our devices may not be useable after some EOTWAWKI scenarios, but it couldn't hurt to pimp out your device for the apocalypse. So I decided that I would download every EOTWAWKI useful apps I could find and start this new post series where I pit a couple of mismatched apps against each other where one is the clear winner and one is the clear loser.

So I think I'll start off with the winner app of the week, as you generally want to here the good news first right. So here we go.

This is a pretty darn good app, especially for free! When I started downloading so many of these apps I forgot which were which and which ones were free and which were pay and how much I paid, so when I went back to the app store after reviewing this app, I was shocked to see that it was one of the free ones. I was expecting it to be one of the $3.99ish ones but no, free, pretty cool. So I can safely say that as it is free, there is no reason for me to be apprehensive in any way about recommending that you go and download this app. So with that being said I can get to the info.

This app is loaded with information. The app itself is completely based on the US Military Field Manual FM 21-76. There is many sections in the app, I'll list a few starting with survival planning, basic survival medicine, shelters, water, survival use of plants, signal techniques, poisonous plants, ropes and knots, and many more sections. Each and every category is very informative and extremely thorough and highly detailed, with many pictures and diagrams. It even has a section on military survival kits and what are in each type of military kit. I guess I couldn't expect less from something that's basically a carbon copy of a US Military manual, but it's very in depth and for free is very well designed and aesthetically pleasing to use and look at. I think the only thing I can see as a negative for this review is the simplistic and vague name "survival guide" isn't overly imaginative but I guess they were going for the phrase people would be searching for, so I guess it makes sense. But otherwise there's no reason I can think of to not get this app...free, decently designed, and a wealth of information...I can say nothing but good things about this app and would feel no guilt for telling you to go and spend no money to get it lol.

And I figured at this point I would start off this weeks loser app by stating that this is truly an awful app, and after writing my review, then reading other users reviews at the app store, it seems like I'm not alone.

This "survival" app is hilarious, I know it's not supposed to be hilarious, but it is. Even though it does cost 99 cents this app is worth the download for the entertainment value alone. Some of the most poignant expert information are lost in translation as the app is written by a guy from Deutschland, but at the same time some of the "better" more "entertaining" information is just from his "sense of humor" lol. I'll give a couple examples of his expert advise.

"How do i build a shelter?
you are in the forest, you need shelter, it's getting dark and you are scared.
The first problem is obvious: you barricade yourself in a house.
No house nearby? Fuckin' idiot"

Haha he states that if you are in the woods that you should find a house and if you can't you're fucked hahaha. Precious. Then he goes on to state as a tip in the section about being on an "lonely" island lol, that you should observe "natives" and if they torture sacrifice or murder one of their own that you should, in his expert advise, GET THE FUCK AWAY FROM THEM! Lol. Seriously? And his plans to get off this "lonely" island, tie yourself to two sea turtles lol.

So needless to say, this app is pretty much useless as it pertains to survival information and TEOTWAWKI. But I think it's worth a read based on entertainment and laughable moments of insight beyond normal comprehension. Many moments while reading I literally laughed out loud at the absurdity of this app. But you should check it out for yourself.


So there you have it, the first ever "Survival IPhone Apps Winners & Losers" post of hopefully many as I try out the rest of the apps I've downloaded and will post semi regularly, and hopefully people out there keep making apps that could be used by preppers for the apocalypse. Also, if you know of any apps that are poignant to our goals, let me know what they are and who makes it in the comments below, even if it's not apple device related, maybe one day I'll do some android posts as well if I get enough of you letting me know of apps for android. 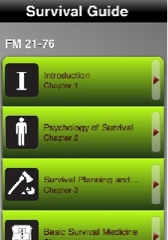 Email ThisBlogThis!Share to TwitterShare to FacebookShare to Pinterest
Labels: Apps