Firstly, I would like to say that I thoroughly enjoyed this film, I would have enjoyed it even If I wasn't into TEOTWAWKI right now as well.

So, let's hit the synopsis of the film. Everyone is dead from a viral outbreak, and the survivors are all scrambling to find a cure. This story follows four main protagonists that are trying to get to the coast to stay in an abandoned hotel the two brothers in the group used to summer at as children. The film seemed to me anyway, to be trying to keep as close to reality as possible in this tale. All the characters interactions with each other and with others they encounter are as real as I could imagine, I never found myself thinking that this seems forced for the sake of storyline. As the groups encounters people and or obstacles the argue and agree with each other as you would think that people really would. The violence and paranoia that comes with the foreseeable end of the world scenario are very plausible and even likely. Some of the acting may be forced at time and even overdone at others, but overall I felt the cast did well with what ethey were given, and I felt at no time during the film that this person shouldn't be in it. I did however notice, and have with many EOTWAWKI films I've watched over the past few months, even films I had previously viewed before my walk into preparedness, that I find I watch movies like this differently than I would have before. You know you do it too lol. Watching movies from our perspective makes them a little more either interesting or more implausible depending on how much thought the writer and or director have put into the film. Things people take or have with them, and I find myself thinking that that would be a good thing to keep. Or watching them walk right on past something they should need. Don't do this, and why aren't you doing that lol. This movie had a lot of preppery people or situations that give this story a little more legitimacy than most post apocalyptic films.

NOW FOR THE SPOILERS LOL, IF YOU DON'T WANT THIS MOVIE WRECKED, SKIP TO THE LAST PARAGRAPH

A the beginning of this film the foursome encounters a makeshift roadblock made by a father and young daughter duo that have run out of gas and need has to get going again. When the four stop to assess the situation they discover that the girl is sick and peel off away from them going off road to get away from the father. This encounter and fleeing attempt eventually wrecks their vehicle and has them returning to the father later that day. Later when they return, the return to take the vehicle from the father and daughter with the goal of using the remaining fuel from their broken car to get their gas less one going. Eventually they agree to take the father daughter team to a specific town they were heading to and keep their vehicle in exchange for not leaving them on the side of the road to die. They bleach the shit out of the vehicle and make a pseudo quarantine are in the back of the SUV with plastic sheeting and a lot of duct tape.

What I like about this encounter is that it shows us the fuck you attitude we all have towards each other until we need something from you guy we all truly are. People use each other a lot and the end of the world is just going to intensify the situation. I would hope that I would be willing to try and problem solve around a situation and help a fellow father out, but I can't discount that chance I'll fuck that guy to further my families chances.

Another situation in the movie that I thought was pretty cool was when the foursome crashed a golf resort and stumbled upon a movie version of a prepper stronghold. Fully stocked with jugs of water, dozens of rolls of duct tape, plastic wrapped walls, and guns to the tits. It was a fairly short portion of the movie but interesting to me lol.

From who lives to who dies, the situations that they are put through are hard but they muscle through and life goes on.

END OF SPOILER SECTION YOU MAY COMMENCE WITH READING

With all the situations that happen, most people would give up or die, but our heroes move on. Situations we could all one day find ourselves in. A massive viral outbreak could happen at any moment without any notice at all, that's pretty damn freaky. So this movie, I think, pretty accurately portrays what we may be looking at in our certainly likely future. So with that said, I going to conclude this post by saying, while this movie isn't the most interesting most entertaining movie ever made, it is a pretty darn good EOTWAWKI film and I would recommend you watching it. 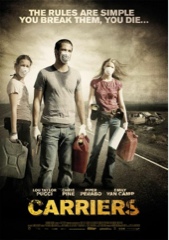