If you don't know what the matrix is, firstly what the hell, secondly the premise of the (movie) matrix is that the hero of the film discovers that we are not living our lives but living in a digital construct of what our world could be to keep our minds complacent as machines use us as power generators. So once this realization occurs crazy kung fu hacktastic sci-fi CGI ensues and everyone is happy. But as far as this weird post, that's all you need to know about it.

So I was thinking, and the thought occurred to me that what if we are in a matrix type situation and eventually have a matrix apocalypse where we all become aware and break free of our cybernetic overlords and try to declare our freedom. Then the thought occurred to me that if indeed we are in the matrix right now, preparing for TEOTWAWKI, we would have to do things a little differently to prepare for the matrix EOTWAWKI scenario. Food preps and weapons caching is fine and dandy for any other apocalyptic event, but not the matrix. If indeed the matrix construct were a real thing and it was being used to keep our minds complacent while our bodies were being used to generate power, knowledge would be the prep of most importance. Regardless of acquiring skill-sets and knowledge bases in the real world or in the matrix, it's still information that your brain has acquired. This would be especially important once, if like in the matrix films, you realize that generations of people have been born and died hooked into the matrix and never lived and actually day in their physical body. So learning as much as you can about anything and everything would be of the utmost importance to your future survival once you or someone else set you free from you physical connection to the matrix and reinserting you into the real world. The knowledge you acquired in the matrix would help you survive a post machine take over apocalyptic world where people have been near exterminated bug the machines. Having the knowledge to survive and thrive without any means other than you wits, will mean the difference between mere survival and the redemption of potentially the entire human race through a hopefully successful human revolution.

Even though the notion of a matrix type situation is pretty far fetched and highly improbable it would still be prudent to prepare for any situation that could happen right? Especially once you take into account that it couldn't hurt as many of you already are acquiring as much information as you can anyway. So every time you learn something new to fend for yourself and thrive in a world where you're on your own, tell yourself you're a little closer to being prepared for a Post Matrix Apocalyptic world...and a little closer to being the saving grace of the entire human race lol...hey we can dream big cant we. 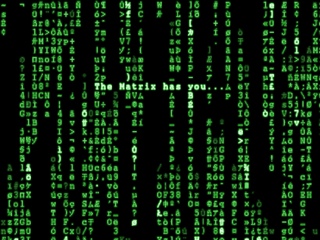