Alexander Wolf over at TEOTWAWKIblog has started a weekly series called Getting Prepared for $40 a Week, and being that I think this is a great idea, I thought I would do a follow along post when I get/purchase the items in his posts. I would like for them to be as soon as possible after his original post, but a lot will probably be weeks later as a lot isn't locally available to me and thus lending to online shopping and shipping time. As I receive the products pertaining to each of Alexander's posts ill post a write up on the product I purchased or reason why I didn't purchase that weeks item, and a link to his original post, so you can read what I read.

So, with that explained ill get to the first week, which was like any good survivalist should start with...the survival knife. This post was originally posted on Tuesday June 26 and heres the LINK. Alexander went a little sideways on this, and instead of really focusing on a specific knife, he recommended a multi tool as the perfect first knife for under $40. Specifically he recommended the Leatherman sidekick or wingman which are very similar and capable tools. He listed the tools at $29.50 (at amazon) stating that we'll hold over the remaining $10.50 for future purchases. He writes that we'll never spend more than $40 a week, but when under, we'll save that money for future, larger than $40 purchases.

While I didn't buy a Leatherman sidekick or Wingman, I purchased a Sheffield Multitool(pictured below), that I was able to purchase locally, for aproxomitly the same price, I think mine was about $4 cheaper, so I guess I'm holding about $15 over from this week. I really like my Multitool and have already found myself using it more frequently than I had anticipated I would. It's amazing how frequently you find yourself needing something like this when you actually have one, where before you would just unconsciously admit defeat and move on lol. Always having a versatile tool on your hip makes life just a little more manageable. I can't imagine how useful this would be if I was doing a more labor intensive job.

With week number one behind us, I can't wait for the next weekly installment of this series on the TEOTWAWKIblog. I really think that a series like this that I can follow along as a beginner is really helpful at focusing my thoughts on what to buy next. I tip my hat to Alexander for a great simple idea to keep us newbs moving forward. Also, on a side not to those either familiar or new to this blog, it will soon become very clear that TEOTWAWKIblog, is one of my favorite blogs to follow. Mr. Wolf is not only seemly knowledgable about a lot of this stuff, but how he looks at it and his readership is nice. I really enjoy his blog, and I would imagine if you weren't already a reader, you would too...so check it out if you haven't already, and tell him Jason at Project Apocalypse sent ya lol. So until next time, here's hoping you and I purchase the next $40 item before the shit hits. 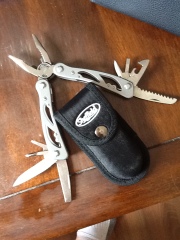