What can I say about this book that probably hasn't been said a million times. This book is very good, even if you don't like zombie themes, this book I'd far more about the human condition. The greatest aspect of this book, is that it's called an oral account of the zombie war, and what that means is that the book is a series of oral accounts from people (survivors) all over the world about what happened during he war against zombies. So with many accounts of what happens comes many different ways of viewing what everyone else is viewing, and many ways of dealing with what we are all being put through. From young american girls, to Japanese nerds, to US marines, to Japanese submariners and even astronauts trapped in space (called it lol) there are many different views of the war. One aspect I never would have thought of was how soldiers are trained to shoot, center mass, and how that would not be easy to untrained in the event of an enemy that could only be killed if shot in the head. Months if not years of having it drilled into your head to shoot or the chest...the chest...THE CHEST SOLDIER! And then in the heat of battle having to unlearn all that deepset knowledge and adapt. Needless to say, the soldiers at that point of the book had a hard time adapting. Most zombie related media are quick to the climax, seemingly over in a matter of days or weeks, but this zombie apocalypse goes on for years. People holing themselves up in medieval castles and military installations hoping to fend of the undead horde. Military personnel going rogue out of self preservation, going off the grid against orders to survive. Messed up notions like zombies on the ocean floor, having either walked into the ocean following the fleeing people, or being created on one of the many boats that now inhabit the ocean, and then aimlessly wandering off the boats and sinking to the bottom. Popping up out of the ocean in the strangest of places. Zombies underwater...scary thought. I also love the thought of astronauts trapped on the space station watching the war from space, mainly because I thought I was the only one who thought of how awful it would be to be an astronaut after TEOTWAWKI in my 7 Things Post. Parts of the saga humankind tries to evade the zombies by retreating to the north, ie Canada because in the extreme cold winters up here, the zombies freeze only to thaw in the spring, haha, why wouldn't you destroy any and all frozen zombies you find? Also, when trying to rebuild a working work force, the US census ascertains that 65% of remaining population at the point of the story they were at at the time was essentially unskilled workers, as a large portion of what we all do for jobs these days are of no actual use in the real real world lol....I just thought that that was funny.

Adapting to circumstances is the theme of our survival in this story, and while a lot of people die or become zombie, then die, mankind perserveres because thats what we do. What we think will happen isn't always what happens and the strong roll with It. I would hope that we will adapt like the folks in this story if the time ever comes for us to fend for ourselves and rebuild society. But as far. Fictional tales go, this is a pretty good one, no wonder I've heard that Brad Pitt is set to star in the big screen rendition of this book. 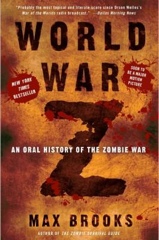