Governmental reacquisitions, Should You Believe the Law is Back

So a ways back I wrote a post called"The Human Remnants of Military, Lawless Mercenaries At Your Door" where I wrote about the notion of lawless mercenaries tricking communities into believing they are government sanctioned convoys sent to restore law and order, only to turn their weapons on everyone once past that communities defenses. So this article is the flip side of that same coin, what do you do, when the government is seemingly taking back the control of the land? Do you believe it blindly? Or do you need proof? What proof? What could They possibly show you that would prove that law and order were back? Let's just say that we lost contact with one another, say an EMP fried everything, or the power went down from whatever and we couldn't communicate, so there wasn't even a way to forewarn each other that it was coming. How many of us would just attack and ask questions later, but later never comes because we're carpet bombed in retaliation. Depending on what even happened to put us into this predicament, what would you do if you didn't WANT the government to have control again. Now at this point all sorts of patriotic ethical situations occur. Is it unpatriotic when your existing government screws the whole country and leaves us all to fend for ourselves and refuse to submit to THAT government when it gets back on its feet and rolling over all the small little fiefdoms that we create? Could the people recreate government? Could a new governmental structure exist and not destroy what the country used to be? Is it against who we are as people whom are devoted to our countries to turn our backs on the government that screwed that country? Is it possible to separate the country from the government that governs the country? If we ever got past these debatable questions, what do we do, when we don't believe that that existing government deserves the right to control us again? Is it ok to attack without warning if we believe it's our only advantage, or do we owe it to the new government we hope to form to diplomatically disband the previous government?

Don't get me wrong, I don't think that we'll need to blame our government for our downfall, and we won't need to overthrow the returning government, these are just thoughts that could be something we'd need to figure out. Who knows what we will need to do post SHTF. But when we get back to the original question, if and when the government comes rolling back into our lives, so you believe the law is back? Or do warily require proof or guarantees that our best interest is their main objective? Who knows. Being that we could go through years of turmoil before the return of the government, and all that we had seen or gone through, could really jade our ability to trust or even care about anyone, but what would you do? 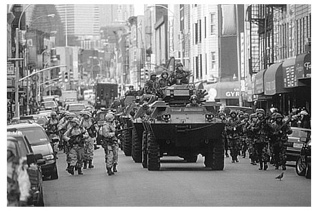