A Grasshopper in Ants Clothing

So for my prepping as a hobbyist movement I'm trying to start I will ungracefully bastardize this once well spread tale for my own illustration.

There once was a grasshopper that really liked to have fun, he liked his stuff...cell phone, his computer...big screen tv and countless movies and video games he played with. So the grasshopper was at Walmart buying dinner when he noticed this ant collecting as much rice and salt as he could get his hands on. And he thought that this ant was crazy... What the hell is he gonna need that much rice for? And went on his merry way, running into his fellow grasshopper friend in the outdoorsman department and wondered what was up? Going camping? He would say, to which his grasshopper friend says "have you ever noticed how cool some of this outdoor crap is? This here radio gets power from either this solar panel up here, or via cranking this arm here manually to get power...it also could charge my cell phone if I needed...like if we were camping and needed a charge. And there is all kinds of other cool tools or gadgets in here. Oh the first grasshopper likes that word...gadget...it's like porn to his ears. But why would you need this? Says the first grasshopper. It's not that I need it, says the second, it's cool, I can use it it if I need it, and it could be very useful if that crazy ant over there happens to be right. So the grasshopper walks away thinking that some of this "stuff" does seem pretty cool. When online at home he checks some things out on amazon, pretty cool, sees what other people bought with these items and related item lists and is off and running....reading reviews on this, buying that....searching for cooler and cooler items. So now the grasshopper isn't exactly like the ant, out there cultivating crops and putting food away for the winter, but the grasshopper has bought some farming equipment.

So this same grasshopper, runs into an ant on the path to the ant colony and the grasshopper says, where you off to in such a hurry bud, to which the ant says, winters coming and we gotta get our harvest done before the white stuff flys. To which the grasshopper still says, you gotta a lot of time, don't worry about it. But at least now, the grasshopper is of the mindset that prepping for the winter is important, and time is a factor. So in this analogy, I'm trying to illustrate how baby stepping someone into a full on prepping lifestyle can and will make more people willing to prep for any circumstance. After some cool tools and gadgets, the grasshopper probably wouldn't think it to far a stretch afterward to make an emergency bug out bag, not for the EOTWAWKI, but his own safely during let's say a forest fire or flash flood...makes sense right. The ant could then convince the grasshopper that maybe getting a little ahead on his grocery shopping to have a food reserve for let's say losing your job, or you get hurt and can't work. The grasshopper is surely becoming a grasshopper in ants clothing at this point, it wouldn't take much at this point to get this grasshopper fully prepared, or at least see that preparing is worth contemplating.

The once unimpressed grasshopper is now a part of the ants community, trying together to prepare for the upcoming winter. It may have taken longer to get this grasshopper here, but here at any point is better than that grasshopper needing this ants stuff.

Prepping as a hobby, makes it incredibly easy to transition into the lifestyle to what ever level you decided you want to immerse yourself. I think a lot more people would prep this way, then going at them full bore saying the TEOTWAWKI is coming and you need all this shit NOW!

Just a thought though, what are yours on the matter? Do you get where I'm coming from? Or do you think it's a waste of time? Let me know what you think in the comment section below. 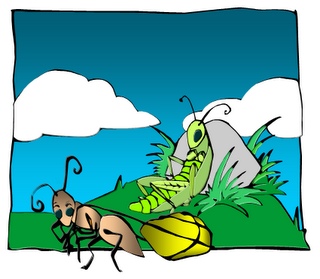