You Are the Network So You Matter

Over the course of the evolution of this blog, and the network of people I hope to have integrated with each other either directly or indirectly, you will here me refer to such Internet gurus like Ze Frank to help me illustrate how important and useful a working eNetwork can be. One of the biggest part of the prepping network that is deemed A. Important and B. lacking is the assimilation of others into the prepping mindset. Every prepper worth their salt online believes one of the most important thing to keeping your preps safe from other people, is those other people not requiring your preps... And how do we get that, by them having their own preps. At this point we can talk about the "looks", if you prep or talk about prepping chances are you have gotten the "look" at some point from someone. The look that says you're crazy for prepping and crazy for thinking anything is ever going to happen....forget the end of the world, you're crazy for thinking a regular old natural disaster is going to happen.

At this point we can get back to what I've always called myself, a prepping hobbyist. When you say to someone, especially someone you are not intimately acquainted with, that you are prepping for TEOTWAWKI you're going to get some pretty off looks which I'm assuming many of you are well familiar with. But when you say to someone that you are prepping as a hobby, you get a weird look as well, but it's followed by questions. As someone probably said, there are no dumb questions just dumb people lol. Questions like, why would you prepare for some catastrophic event you don't think will happen? To which I would say, I didn't say I don't think that it won't happen, anything could happen, but I'm prepping for the sake of prepping...to try stuff out, learn some things I didn't know, acquire some skills I don't have. As a hobby. People that collect coins aren't doing it to start a bank,and stamp collectors aren't going to open a post office....they just like the stuff that goes along with it. What I like about this approach is that each question breeds more questions, like "what kinda things do you collect or what kinda skills do you learn that are so interesting?" and I follow with, all sorts of cool toys, like crank radios that charge your wireless devices when you have no access to electrical outlets, or nifty portable water purifiers, or bitchin knives or guns! dudes get all jazzed p when you talk about guns. I say some of the skill-sets that you teach yourself preparing for a societal breakdown like picking a lock, or hot wiring a car....if nothing else make you interesting to know lol. At this point you could talk about the theoretical scenario that TSHTF and your neighbors want your food and provisions...what do you do now? To which they would say, "well, I would just defend my stuff with whatever means nessisary" to which you would say, what means? Then you hypothesize about who to help and who to make move along, what about power, heat...water, oh my god water. Who on earth doesn't know water is beyond important, when it starts coming out of the faucet, where do you get clean water from now... By this point you usually have them pretty interested in what you're saying.

I usually (usually, like this has been going on for ever lol, I just started talking to people about four weeks ago) say at this point that you don't have to go off the deep end and live in constant fear and damnation at the ever looming EOTWAWKI, you can just prep as a hobby... You know, like comic book collectors or playing golf every weekend. Read some material online, buy some stuff...I mean even the government wants you to make a bug out bag. "the government wants me to make a bug out bag?" they would say right about there. Yeah, they do... I could show them the pamphlet I got in the mail a couple weeks back. Prepping doesn't have to take over your life, but every little thing you do is something that could save your life one day...does that sound crazy? What's playing remedial golf every weekend going to get you, or collecting stamps...maybe a big payday, one day...are stamps going to save your life lol.

When you convince someone to prep as a hobby or a lifestyle, you've now made a singular network connection? No, you've made many, because even without your urging, that person is going to eventually tell someone about you, and what you're doing, and then another, and they'll tell someone, and as long as everyone is making sense, the network is being made. Like I've said before, it's much easier to get someone to go half way comfortably and then asking them to come the rest of the way than asking them to just come the whole way right off.

So if you are reading this, you are at the very least an indirect module in the network, if you help me, you are more of a direct working module within the network...which if nothing else is more useful to me directly. But by helping this beginner (me) you help other beginners that find my blog by proxy. Give a man a fish feed him for a day, teach a man to fish feed him for a lifetime, teach a man to teach many men to fish, prepare us all for the shit hitting the fan... Haha, you can quote me there lol.

Building a network starts with you, let me know what you want to see or what you can teach me the beginner. The more we know, the more we know right. 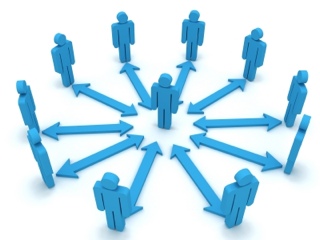