Firstly, this movie is German made, which if I had known that I probably wouldn't have rented it. However, I gotta say I'm glad I didn't know that because I'm glad that I watched this film. Even though for the most part I hate having to read my movies lol, this movie was well pieced together and as far as could tell well acted. The scenery was grim and dark, well as dark as one can get when the sun is catalyst for the end of the world.

The premise of the film is that due to solar flare activity the earths temperature has risen ten or degrees and everything has either died or withered due to the lack of drinkable water. Within the storyline a small group of people interact with the post apocalyptic landscape and the other people in it. Situations from bartering water for gas, or fighting for you life, to people hunting people and kidnapping. Improvised weapons and on the fly tactics for evasion, retrieval and escape make everything seem like its actually happening. The pace of the movie isn't fast paced but it feels like its moving, probably due to the never ending end of the worldness of it. The small group of protagonists are constantly trying to circumnavigate the EOTWAWKI world and always coming out on the short end of the stick. One of the best parts of this film, is that every character in it acts like you would imagine they should act. It wasn't long into the film that I hadn't noticed I forgot that the film was in German and that I was reading it, it just kept me so interested in what was going on that I didn't care that I was reading the dialogue, but at the same time I could still feel all the emotion, anger and terror in all the characters involved. Like I stated earlier the scenery is very impressive, the filmmakers did a very good job of making the landscape look like it WAS the end of the world as we know it. Singed dried up trees and dusty desert like roads and ground. Dirty old everything, all the evidence of mankind and all mankinds supremacy, dirty and warn down, torn up by the remaining people looking for food water and fuel or anything else they can use to trade for supplies. The direness of the worlds situation is so evident in near every shot in this film, from the bundled up people avoiding being burned from the sun, to the lack of any wildlife to the importance of seeing a bird of all things, it is very evident that this world is in trouble and trouble for a long time to come. The film never even tries to portray a future that looks anything other than grime, which I like, as most EOTWAWKI films want to try and end with the "hero" of the film saving mankind and all humanity from the turmoils of post apocalypse life. Life just goes on, grim and bleak...but onward life always goes. But like the people in this story, I hope my people and I are the type that can keep moving forward, keep staying alive and perhaps one day, way in the future, bring humanity back from the brink, not because I'm so good I could save mankind, but because I can adapt t the situation at hand and help and lead my family through the darkness and back to a civilized society, stronger, because we saw humanity fall apart and almost destroy itself only to come or stronger the other side. But hey, maybe I'm just dreaming haha, but dams move humankind forward right. 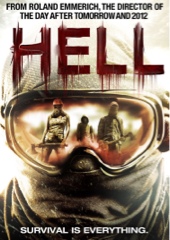