Let's get a few things out of the way here before we really delve into this series of books. Firstly, this series of books is categorized as young adult fiction, but I didn't find it overly pointed at youth other than the main characters in all three books are young adults. Secondly, I don't know the validity of the theories behind the event in which TSHTF and TEOTWAWKI occurs, and don't want to get into any arguments about whether or not it could or couldn't happen or whether or not certain things would happen or not. So with that stated ill get to the books.

I loved these books. The thing I loved most about them was the event in question, the moon crash. So in simple form, this is what happens. The world is watching what there being told is going to be a spectacular event of a fairly large meteor striking the moon and how rare it is to be able to see something like that with the naked eye. So the whole world is watching as this meteor strikes the moon, but unlike what they have been told, this is more than just a cool event to watch, it is the moment before the EOTWAWKI. It seems the astrological society has misjudged the density of the meteor and the impact has "pushed" the moon closer to the earth. In the book it is stated that you could visibly see the moon get closer to the earth. Now anyone who's taken a grade 5 science class knows that the moon controls a lot of s tuff on earth, and such a drastic change would dramatically alter the way offline on earth. Which it does. So as you can imagine, chaos ensues. People panic, there's looting, killing, people panic strickenly hoarding food and supplies from the supermarket. Within the story you get to know a handful of characters and in the second and third books, more people from different parts of the country. The trials and tribulations of the people involved are interesting enough to keep you interested, but not so out there that you begin to question the validity of the events. What I love about the "event" is that it goes against what is in normal EOTWAWKI fiction, nuclear war, zombies, viral pandemic...you know, the normal things. It's so out of the norm that it made the events that transpire afterward seem almost more interesting because you don't know if all these events would actually happen because the moon was closer to the earth, because I never thought about the notion of the moon being anywhere but where it normally is. Another thing I love about the series is something not in the book at all,and that's the author herself. When i went to find out whether she had any other books I may like I found nothing like these books in her portfolio. These three books were about as far away from all her other books as you could get. Susan Beth Pfeffer is a fairly prolific writer and has been publishing books for the better part of thirty years or more, but most of them are those teen high school type girly books with a pretty teen girl on the cover, usually by a locker or some other high school like fixture. So I found it beyond interesting that this woman went so far outside of her normal musings to create such an interesting world. So upon finishing the third book and wanting more I found the authors blog and it just so happened to be the day she wrote a blog post stating that she had just started writing a fourth book in the series, imagine how lucky I felt showing up on the day she started writing. So, I can easily recommend this series of books to anyone interested in fictional EOTWAWKI scenarios, with the excitement of knowing there is at least one more coming, as of right now titled "The Shade of the Moon".

Hope this write up on this series makes you want to read the series, as it is quite interesting and here's hoping you get them before shit hits. 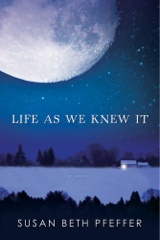