Following Along @$40 a Week: Week 2 The EDC Flashlight

So Alexander over at TEOTWAWKIblog's Prepping on $40 a Week is on week number two, and this weeks item, the EDC (every day carry) flashlight. His original week two post can be read HERE.

So, in this weeks post Alexander delves into what he looks for in an EDC flashlight. He states that his current EDC flashlight the Surefire E1B is one of his favorite things that he always has with him, however he states at $120 it's far outside the price range of this post. So, for the dollars, Alexanders pick for the budget savvy prepper is the Fenix E11. A nice little flashlight and at $27 on Amazon, it's well below the $40 so $13 would go into the savings amount. Now I gotta say, I came about as close to buying this item as humanly possible without actually buying it. I was at Amazon, I had put enough money on my prepaid card we use for Internet purchases to buy the flashlight, I had followed the link to the item, I had added it to my cart, I had put in all my credit card numbers and address bullshit and clicked through until the final page before you actually own the item... and then I changed my mind. I really wanted to follow along on this item, but I couldn't justify spending the money on a flashlight that I didn't think I really required. Right now as my EDC Flashlight I carry this (pictured below) small crank powered flashlight. Now it may not crank out 100 lumens like the flashlight of the week, but it serves it's purpose and I don't have to worry about batteries with mine. So this is the main reason that I opted out of this weeks purchase at the last moment, I just couldn't buy something I really didn't believe I needed when I could save the money and buy something of my amazon wish list, or hold it over to make sure I have the funds for next weeks item. Either way, this eks item, the EDC flashlight wasn't something I was willing to buy, but most.y due to already having a suitable replacement for the time being. Who knows, maybe down the line I'll feel I need an EDC flashlight capable of kicking out some higher lumens, but for the time being, I'll stick with my little crank flashlight.

Mr. Wolf says next week we are moving into building a budget indeed bug out bag, which i am excited to see, I'm only half way though building my first bug out bag, so anything bug out bag oriented and I get excited lol. 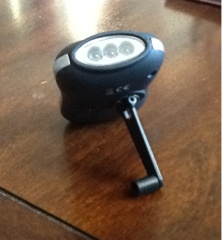