The most fabulous aspect of this book, for me anyway, is that this book touches on in great deal with surviving in buildings, which if you pay attention to me much on the Internet is important to my survival as a high rise tenant. So color me giddy when I came across this gem of a book. Ragnar Benson's Urban Survival delves into the world of surviving, thriving, and combating in an urban setting after or during a catastrophic event. Even though this book is pretty short, (100 pages on my iPad, compared to an average book length of 300) it covers just about everything any other survival book would cover. Mr. Benson goes into great detail on the big three keys of survival, being shelter, water, and food...but spends a lot of time going over the many types of urban assault scenarios that could happen, including military avoiding the use of inner city streets to move about the city, but sometimes driving tanks and other vehicles through buildings to stay under cover. I only mention this because I never would have thought of doing such a thing. There is quite a few diagrams to go along with the methods he explains in the book, which I found refreshing as I tend to be a little more visual than I should be. The jacket of book states that Mr. Benson's says that in order to survive, you don't have to run for the mountains as most survivalist would have you believe, but with adequate planning an urban hideout will do you just as good. While I don't completely agree with the sentiment that urban stockpiling is an adequate answer for anyone, I do like that he acknowledges that a lot of people, especially depending on the circumstances that had occurred, don't have the means to evacuate their city for some country getaway. I appreciate that someone has put together at least a small book to help some of us that don't have a country cabin, or even a suburban house to get away to or hide out in. A lot of people live in buildings, and the market for people that could try and help those people prepare for an undisclosed event is pretty huge. I know from looking that there isn't a lot on apartment and/or urban TEOTWAWKI plans for after the event. A lot of apartment preppers have blogged or forum threaded about their prepping innovations to accommodate small quarters and lack of privacy, but there's not a lot about what to do after an event to protect what's yours and what you've prepped. I think if I can accumulate enough data and knowledge about this subject, and I think I will, I smell a book someday. Who knows, maybe I will. But until then my fellow preppers apartmented or otherwise, here's hoping I can pull that off before the shit hits. 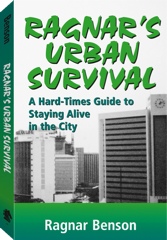