This book is fairly amazing, and an incredibly in depth look at how to survive catastrophic events of any kind. One thing I found truly different about this book was how looooong it took for the writer to get to anything about the hardware of surviving TEOTWAWKI. It took like 200 pages for him to get to what most books start with....water. The first 200 pages dealt a lot with the physiological and physiological effects of a disaster, which I found very informative and definitely set the mindset for the rest of the book. This book is fairly lengthy (600 pages single paged on my iPad), and it is jammed packed with everything you would need to consider and very detailed. The section on water was very informative, and I would imagine that he touched on just about everything that could do with water in a survival situation. When he got to food, the book actually took on an entertainment value on a few different levels...I'll start with the heavier topic that was kinda "entertainment"... And that is famine. Now don't get me wrong I don't find famine and starving people to be entertaining, but the information that he described about starvation in the twentieth century was fascinating and very eye opening about the importance of food preparation now. I thought it was pretty funny (again not actually funny) that the US and Russia had famines and or droughts during the 1930's and neither country has stats on how many people died of starvation through that era of both countries histories. And to an even more extreme, the Chinese famine that 30 million Chinese people lost their lives during the late 50's and the crazy fact that they kept that secret until the 80's...what the fuck! All these major famines where humans were eating anything and everything and everyone that they could find to eat and all this happening within our own century. The other thing I found entertaining in this section was actually kinda funny in the real sense of the word, and that was Mr. Lundin eating expired or rotten food, several times lol. Most of the time he ate this spoiled food as an experiment in how some food can still be eaten long after any normal person would eat it, and the effects of eating it. Some of the descriptions he wrote were quite comical to read.

The rest of the book delves into fire starting, food and water storage, cooking, shelter, transportation, communication, tools and combat. At the very end of the book there is an interview Mr. Lundin did with a teacher from a very mixed martial arts school that teaches close quarters hand to hand combat as self defense that was quite informative and interesting.

Overall the book was very impressive, a little long at times, but I would rather read more than I need to read than less and be left I'll informed. The man is a very learned person when it comes to survival, and I like that he takes you through the thought processes that he's trying to impart on you. I like that he says you can't just trust the "experts" wholeheartedly, you must question the methods and the man, not many people on this earth have gone through a scenario like the end of the world, so most can not claim to know what's going to happen. Take what you can from each "teacher" and form your own strategy.

Now keep in mind, that I am far from an expert, but as far as a novice prepper and survivalist I gotta tell you that this book should be on every new preppers "to read" list somewhere, it's a really good read, and even though it's lengthy I went through it pretty damn fast. 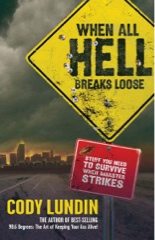